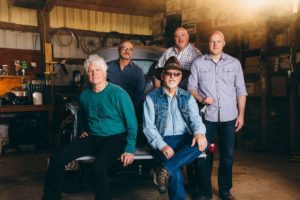 Southern Crossing was established in the summer of 2015. Its members knew each other through playing together in different worship configurations at local churches.  James Dufour had a long time vision of forming a Classic Rock band that would play the best songs from the time when he was young.  He approached the others with his idea and Southern Crossing was born.

Performing at a variety of venues, this band has earned a reputation as the premier classic rock band in the Willamette valley.  Their music is characterized by expert musicianship and tight vocal harmonies.  From live performances to highly crafted recordings, they continue to touch fans throughout the northwest.

Chuck Holst brings forty plus years to performing music; singing and playing acoustic guitar. His rhythm style has been described as ‘percussive’ and his use of cross-chording creates a rhythm tone that intends to support the other instruments in Southern Crossing, while still remaining obvious for the audience to hear.  Chucks vocals bring a smooth yet slightly ‘blue’ feel to his lead singing and back up harmonies.  This slightly smoky vocal image gives Southern Crossing additional potential for sing require a little silk instead of a harder edge.

Gary Rowles grew up in a musical family and starting playing in his early teens. He worked on recording, producing and touring in Los Angeles.  Gary moved to Oregon in 1981.  He opened Wake Robin Recording and got involved with the music community.  He’s happy to be making music with his friends!

Kelly Dufour has been playing piano/keyboard for 35 years. Music has always been a part of his life.  He was greatly influenced and nurtured through involvement at church as well as various Christian bands over the years.  Kelly sees music as a gift to be appreciated, well-crafted and shared for the enjoyment of others.  He has been married to Tricia for 25 years and has four children.

James Dufour has been playing drums since 1977. He grew up in a musical family and has sang and play in church for many years. James has played in a number of bands and written music.  He is the founder of Southern Crossing.  James and his wife Kristal own and operate AAsum-Dufour Funeral Home.  He is thrilled to be making music with this great group of musicians.

Mike Lahr grew up in a dairy town in central California. Like most kids in the 60’s he always had one ear glued to a transistor radio, listing to The Hits and thinking every day, “That’s what I want to do”.  He started playing guitar at 14 and started his first band in high school.  At 19 he joined a touring choir and moved to Los Angeles.  He has played in nearly every kind of musical ensemble; rock, progressive rock, punk rock, country rock, classic rock, country, bluegrass, folk, jazz, blues, choir accompaniment, worship bands and full orchestras.  He has appeared on hundreds of recordings and has played at thousands of public performances.